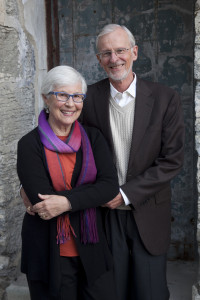 The Rosemary and David Good Family

Rosemary and David’s passion for the arts reaches back to the summer of 1964 when they fell in love on a summer study program in Vienna, Austria. Soon after, they married, Rosemary completed a graduate degree in organ, and they returned to Vienna in 1969-70 so David could do research for his Ph.D. in Economic History.

Over time, music became a family affair. Their daughter, Allison, is an accomplished violinist who combines her love of music with family life. She married James Barosko, a school psychologist and horn enthusiast who plays in area ensembles. Their son, Adam, is a professional musician playing Turkish classical and Balkan folk music with various ensembles in the New York area.

Origins of the Rosemary and David Good Family Foundation

The roots of the Foundation lie in the business success of Rosemary’s parents, Edsko and Claire Hekman, in Western Michigan. As their ventures grew, first importing automobiles and then manufacturing office furniture, so too did their generosity in supporting various causes. Late in life they created the Edsko and Claire Hekman Family Foundation that would function fully once both had passed away. When that occurred in 2007, Rosemary and her sister divided the Hekman Family Foundation to serve their different philanthropic agendas.

With the creation of their own foundation out of the Hekman legacy, Rosemary and David’s support for the arts grew dramatically and broadened to include the full range of artistic expression–visual, literary, and performing. Anchored in the belief that the arts have the power to transform lives and foster social justice, Rosemary, David and their family work hand in hand with their partner, Family Philanthropy Advisors, making grants to creative organizations with dynamic leaders.